In mid-March, in the wake of all the uncertainty stemming from COVID-19, the United States government enacted a stay at home order, closing down all businesses deemed non-essential. Overnight, hundreds of thousands of Americans lost their jobs at no fault of their own; within a week, millions were jobless. Just last week, 2.1 million Americans filed for unemployment insurance, bringing the running total to 40 million over the past 10 weeks. With unemployment at 15% according to the deeply grim April jobs report, the US has the highest unemployment rate since the Great Depression.

In order to pre-emptively prevent deflation and provide money to those who have lost their jobs, the federal congress has approved $2.4 trillion in relief over the past two months, providing a bailout for industries, small businesses, and individuals who have lost their livelihoods. The problem with this is unlimited money printing leads to inflation. 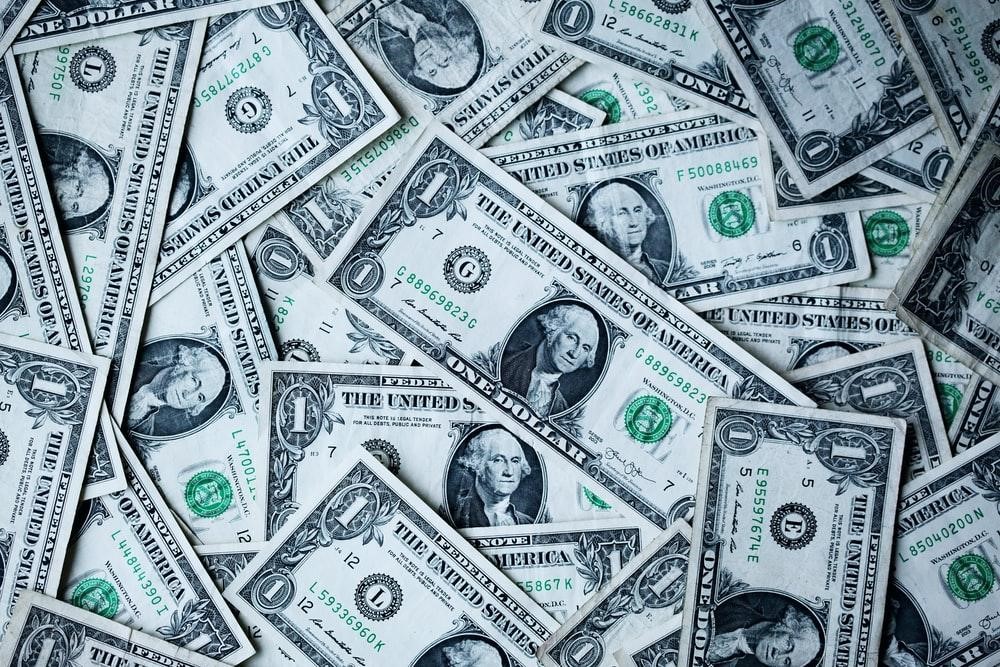 Most of us cannot even fathom how much $2.4 trillion is.  To put into perspective the true value of all that money, here’s a stat: only 6 countries in the world have a GDP greater than $2.4 trillion. The government is in a $3.5 trillion deficit this year, which will significantly add to the Federal Reserve’s accumulated debt (which is already at an all-time high).

Because of the mass unemployment, country shutdown, and unprecedented money printing, it seems likely to many that a recession is on the horizon. We are undoubtedly in a time of financial turmoil.

Many are wondering – Will this be worse than the Great Recession of 2008? Worse than the Great Depression of 1929? Only time will tell. However, what we can do is examine the performance of the stock/bond markets, traditional assets – namely gold – and yes, even, cryptocurrencies, since the onset of COVID 19. So what will be the performance of gold vs. Bitcoin? That’s what this article seeks to explain.

In times of economic collapse, people historically have pulled their money out of risky assets such as stocks and put their money where it is most safe. Some view gold as the safest place; either investing in ETFs or if they are fortunate enough, buying bars of gold. Others view the underside of their mattress as the safest place.

This time is interesting. Crypto has seen a meteoric rise in the past few years– both in market cap and public adoption. A subject of contentious debate is whether or not cryptocurrencies are a “safe haven”.

This article will examine the performance of the markets, gold, and crypto since the rise of COVID-19, in an effort to understand where they are, where they are heading, and where the best “safe haven for your money is right now”

Performance of the Traditional Markets

On March 23rd, 2020 all three major U.S. stock indexes (NASDAQ, Dow Jones, S&P 500) bottomed out, falling between 23-35% of their beginning of year values. As entire countries were shut down overnight, panic set in amongst investors, many of whom sold frantically. Market wide circuit breakers were triggered four times alone in March (i.e. trading stopped four times for 15-minute periods, in order to calm markets). Markets fell rapidly and volatility rose. Uncertainty was at a high. Two of the largest one day drops in Dow Jones history occurred in March of 2020. 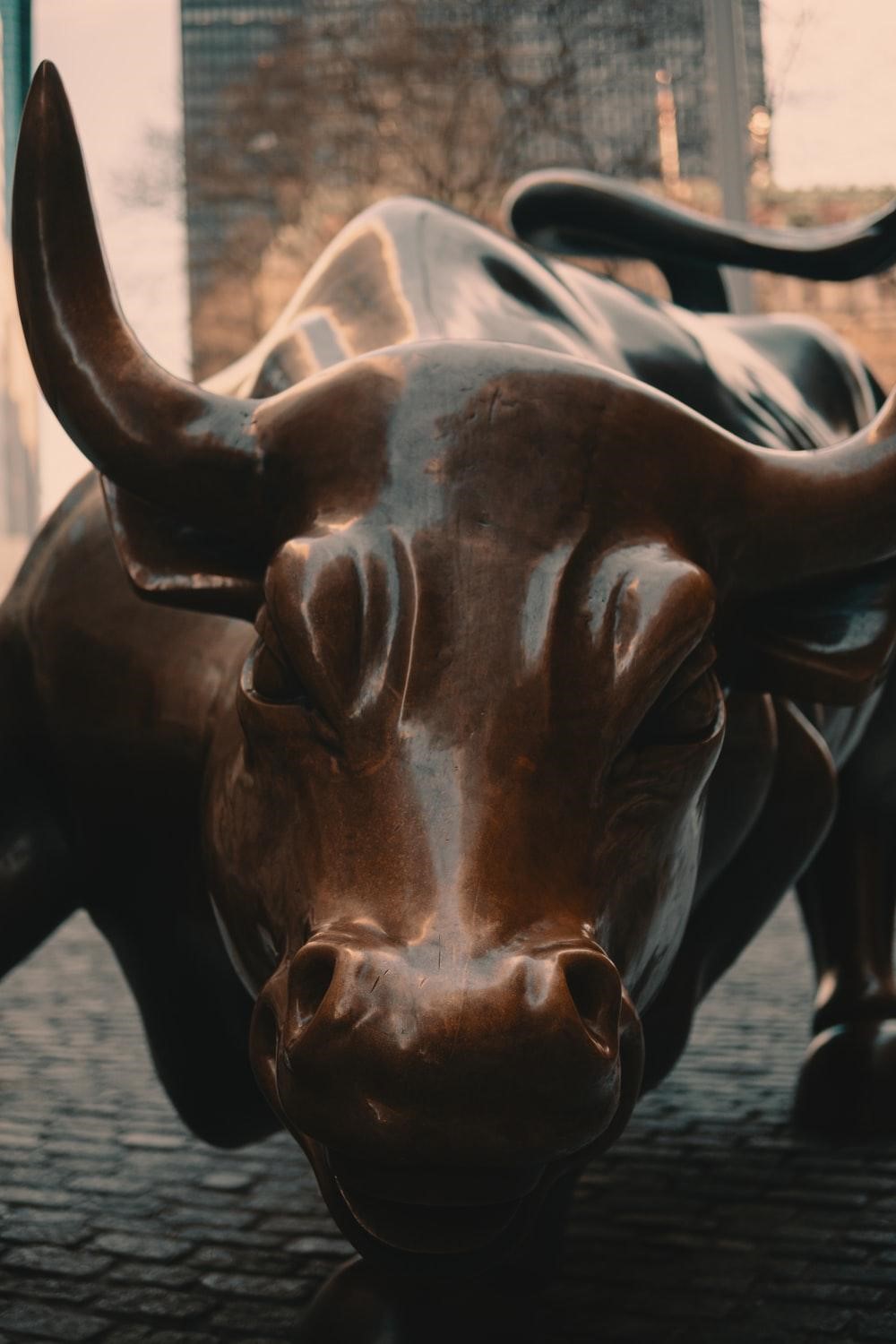 All three indexes rallied through April and have done so into late May, as shown above. Investors were and have continued to be surprisingly bullish. On Thursday 28 May 2020, Nasdaq, S&P 500 and Dow Jones, were up 36.6, 35.4 and 36.6 percent from their March lows.

The death toll and unemployment are climbing, many businesses are still shut down, and we are still in the headwinds of deep economic turmoil.

So why have the markets rallied? 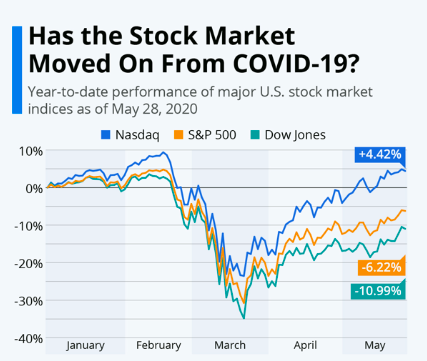 Some suggest the persistence of the markets is due to optimism that life will soon return to normal, as some states have started to open up. Some think: “the economy HAS to open up sooner than later”.  Others argue a fundamental and growing gap between the markets and reality, and that another crash is imminent. However, the stock markets are still well down below their year-over-year value.

Tech stocks have been the most durable; much more than the market as a whole. Bullish investors not only see tech companies making it through the pandemic, but coming out stronger, as trends towards remote work and improved ICT infrastructure increase. Companies are surviving right now because of technology.

This logic has been met with skepticism. Experts question whether the investments are based on a false hope. David Kostin at Goldman Sachs said “the persistent performance of a handful of mega-cap stocks has supported the level of the S&P 500 index, but raised investor concerns about narrow market breadth”. In other words, this small group of mega-companies will not be enough to support the markets in the long run.

As mentioned, during times of recession, people generally move money from investments in company stocks into what they view to be the most stable and safe assets. Metals have historically been one of these safe havens and a good hedge against the markets.

There are a few reasons for this. First, metals (first and foremost gold) have scarcity. Thus, they are heavily subjected to the forces of supply and demand. Gold is seen as a good hedge against inflation since it has a limited and slowly increasing supply, whereas money can be printed endlessly. The Federal Reserve's "unlimited Quantitative Easing" (money printing) is making many investors flock to assets that have scarcity, such metals like gold and silver.

During the Great Recession of 2008, gold prices initially fell during the beginning of the recession. They then quickly rose as the stock market bottomed out and continued to rise as the economy recovered.

It is important to know that people invest in gold in three main ways: ETFs, Gold Stocks such as Royal Gold, and buying gold bars; the latter two are far more common.

So how is gold doing during the era of COVID?

Shown: Price of Gold per Ounce

In the first quarter of 2020, gold ETFs saw $23 billion in investment, a record amount. Increased demand has sent the price skyrocketing. People are putting money into gold because this is what people have historically always done, as well as that they are hedging against potential inflation. Gold prices reached a record high above $1,900 an ounce and were recently trading around $1,650.

Like every other industry, crypto has been affected by COVID-19. On 12 March 2020, Bitcoin and other cryptocurrencies experienced “Black Thursday”, where panicked investors sold at unprecedented trading volumes, causing Bitcoins price to fall roughly 50%. 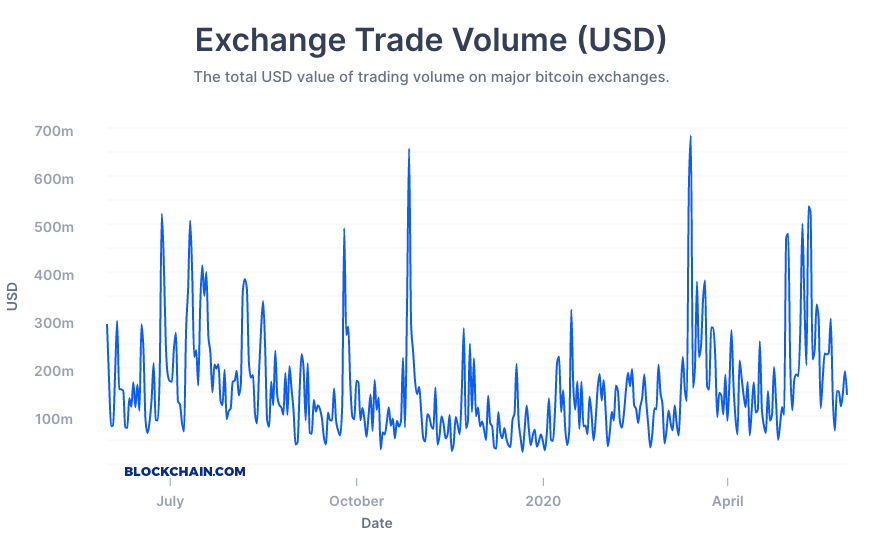 In the battle of gold vs. Bitcoin, the top cryptocurrency has rallied hard since then; harder than any other asset class. From 16 March 2020 to 20 May 2020, its value rose 94%. In comparison, since bottoming out, Dow Jones and the S&P 500 are up 22% and 24% respectively. Further, Bitcoin is up 15% on the year (at the time of writing). Very few asset classes can claim this; even gold. Daily Bitcoin trading volume is the highest it has been since July 2018 and it cannot be entirely laid at the foot of the halving. This is proof of Bitcoin's resilience. On the other hand, Etherium (ETH) and Ripple (XRP) have both rebounded strongly but are down 12.47% and 52.37% this year. 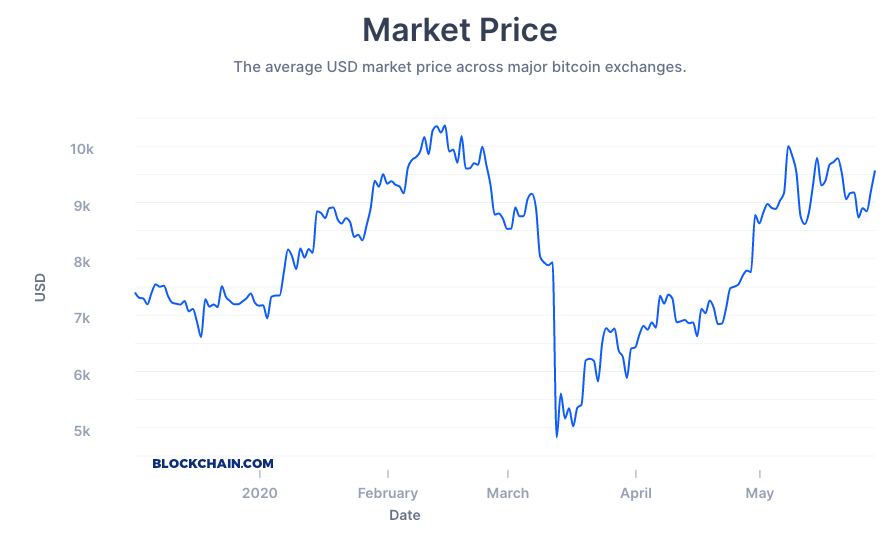 This speaks to one fundamental difference between BTC and the others – proven scarcity.

This proven scarcity is one of many reasons why Bitcoin is considered to be a “safe haven” asset.

Safe havens, defined by Investopedia, are “an investment that is expected to retain or increase in value during times of market turbulence”. By this definition, Bitcoin has proven itself one. There are a lot of questions in people’s heads about gold vs. Bitcoin and which they expect to perform well in this crisis.

As mentioned, assets that become safe havens do so because of their scarcity. Gold has a scarcity. But Bitcoin has proven scarcity. No more than 21,000 BTCs will ever exist. Assets also become safe havens because they are “uncorrelated” with traditional assets. Legendary Bitcoin investor and Golden State Warriors owner Chamath says “I still struggle to find anything that is as uncorrelated to anything else and to everything else than Bitcoin”.

"Is crypto a safe haven asset" is often misunderstood, and those against Bitcoin said it can't be one given how much it crashed in March. But that crash was followed by weeks of gains back to and above its previous value, showing that it IS showing signs of being a good investment in difficult times. Bitcoins ride since March 12th has proven to many that it is what they thought: a hedge against traditional markets and a great store of value.

Its performance during the pandemic just might have solidified its place as “digital gold”.  Analysts compare BTC to the gold rush of the 70s. Bitcoin has almost entirely the same properties as gold, except it is a lot more mobile. Just like gold, Bitcoin’s sound properties offer a protection from currency devaluation

When evaluating its use as a safe haven, one cannot look at BTC in a short-term view. Almost everyone would agree gold is a safe haven. Gold fell in the early stages of both the 2008 recession and during COVID, right before picking back up. BTC has done the exact same thing. It is part of the nature of safe haven assets to be sold during liquidity crunches but rebounding shortly thereafter.

It may have taken the U.S printing trillions of dollars for people to learn and question current monetary policies. It turns out people have begun to do so though. And not just people, but major institutional investors, such as veteran hedge fund manager Paul Tudor Jones, who recently said, “the best profit-maximizing strategy is to own the fastest horse”.

Right now, Bitcoin is the fastest horse. By a lot.

“We are witnessing the Great Monetary Inflation -- an unprecedented expansion of every form of money unlike anything the developed world has ever seen.” said Paul, who stated Bitcoin passes the test as a store of value due to its purchasing power, trustworthiness, liquidity and portability.

Gold vs Bitcoin - Who’s The Winner?

We are in unprecedented times. With entire countries and their economies still shut down, death tolls rising, and uncertainty ahead, no one can truly predict the economic outcomes of this pandemic. The stock market fell sharply and has since somewhat recovered, although it is debated whether this will be short lived. Unsurprisingly, traditional safe havens such as gold have fared well during this turmoil. However, the newest and seemingly safest of safe havens, Bitcoin, has done remarkably well and showed incredible resilience.

About the author: This article is written by Will Bartlett. Will has three years of experience writing and marketing in the crypto and blockchain space. Other areas of expertise include real estate, investing, and business strategy.

Three Asian Cryptocurrency Exchanges To Consider For Your Portfolio In 2022

The Best Cryptocurrency Exchanges For European Investors In 2022

How To Pick The Right Cryptocurrency Exchange For You