UPDATE 25 April 2021: Thodex has apparently closed down, and its CEO has gone missing. They announced this information through the following message on their website:

There has been a need to inform the public and dear users who use our Thodex Platform about the period we have lived.

First of all I want to indicate; publicly, my company is Koineks Teknolojileri A. Ş. and many of the claims made about the Thodex platform it owns are unfounded.

Thodex platform, where nearly 700,000 users have been trading, has not victimized anyone until today, and will not henceforth. 25,000,000.00 TL, which occurred as a result of the cyber attack against our company in 2018. Without reflecting the damage to any of our users, our company tolerated it with its own means and made serious infrastructure changes in order not to experience a cyber attack again.

Considering the financial structure of the company and the number of users, it has attracted the attention of many domestic and foreign investors, and has received very serious partnership offers at the international level. When the financial and digital data were examined together during the partnership negotiations that have been going on for about 3 months, it was determined as of last week that there was an abnormal fluctuation in the company accounts. Thodex Platform has been temporarily closed to determine the reasons and sources of this. While our company technical team was conducting this research, I personally went abroad on 19.04.2021 to make final meetings with foreign investors.

In the examination of company accounts, it was determined that the cyber attack incident continued and the correct data of some account holders could not be reached.

The allegations that I lost about 391,000 people with a loss of about 2 billion USD, which was reflected to the public on 22.04.2021, are unfounded. It is necessary to make this statement in order to respond urgently to these claims that go beyond the limits of honesty and conscience.

Firstly; According to our preliminary findings, only about 30,000 of our nearly 700,000 users have a suspicious situation, and the corresponding bank entry fees of these people on the platform are available in their company accounts. In this respect; I first announce to the public that no users will be victims.

ALSO; A TEAM OF PEOPLE WITH THE EXPERT INTRODUCING THEIR OWN TO THE SOCIAL MEDIA, IF NECESSARY THROUGH THE PRESS BROADCAST ORGANS, MAKES THE PUBLIC APPROACH WITH AN AMOUNT THAT DOESN'T COMPLY WITH MIND, LOGIC AND ACCOUNT. FOR; You THODEX LEAVE ALL TRADING VOLUME OF TRADING VOLUME The CRYPTO MONEY IS NOT THIS LEVEL PLATFORMS IN TURKEY.

Thus; The records of our company have been previously submitted to the information of institutions such as MASAK, CMB, the Ministry of Treasury and Finance, and it is confirmed by the records of the relevant institutions that there are no irregularities.

This process has turned into a slander campaign with inaccurate and exaggerated discourses and causes harm to both users and myself. For; According to our determinations, the payments will be made after the accounts of around 30,000 users are clear. While our company, whose market value is approximately 40 million USD as of today, can continue its commercial life, as a result of the perception of victimization created in the public, our company is prevented from continuing its commercial life.

The important thing I ask dear users is that the statements not made by our company are not respected. We personally are making the return to Turkey in a few days in cooperation with judicial authorities led to the emergence of real and I declare I will do my best to make every effort to prevent the victimization of users. I would like to be known strongly that; I accept that even such an opinion is attributed to me as a cruelty, as I have never had an activity that would harm my state or nation in any period of my life.

In this way; I kindly submit to the public's knowledge that the smear campaign against both myself and my company should not be respected.

Accordingly, we have marked this exchange as "dead" and moved it into our Exchange Graveyard.

To find a reliable exchange where you can start an account, just use our Exchange Filters and we'll help you find the right platform for you.

Thodex is the rebranded version of Koineks. On 6 March 2020, all user assets, together with the users’ respective passwords and personal data, was transferred from Koineks to Thodex.

Thodex – like Koineks – is a Turkish crypto exchange. Turkey has a large number of crypto exchanges. Bithesap is one of them, but there are many many more. To our understanding, only Turkish individuals and companies (or at least only people with access to a Turkish cell-phone number) can create an account at this exchange.

Since 2020, Thodex is actually regulated in the US. They have a so called FinCen MSB license. This makes it possible for them to accept US-investors at their platform. In connection with being licensed, they also translated their website to English as well. Previously, it was only available in the Turkish language, but now it's bilingual (English and Turkish).

As main advantages with the Thodex platform, it lists the following: 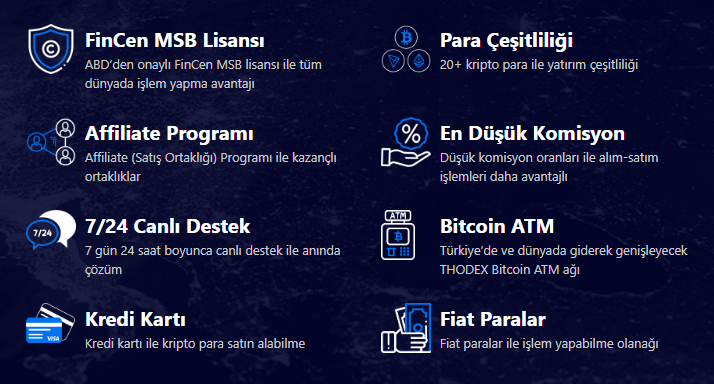 This platform is not only available from your desktop, you can also access it via your mobile. Most traders in the crypto world today carry out their trades via desktop (around 70% or so). However, there are naturally people out there that want to do it from their smart phone as well. If you’re one of those people, then this platform can still be for you.

Different exchanges have different trading views. And there is no “this overview is the best”-view. You should yourself see which trading view that suits you the best. What the views normally have in common is that they all show the order book or at least part of the order book, a price chart of the chosen crypto and order history. They normally also have buy and sell-boxes. Before you choose an exchange, try to have a look at the trading view so that you can see that it feels right to you. The below is a picture of the trading view at Thodex:

This exchange has trading fees that are reduced as volumes are increased, meaning that you are incentivized to trade in higher volumes. But the fees listed in this review and in the comparison table are excluding any such volume discounts. It should be noted here that the first “fee reduction volume level” at this exchange is set at USD 150,000 (TRY 1,000,000). For most cryptocurrency exchanges, this first level of fee reduction is substantially lower.

Thodex’s trading fees for takers, that are not entitled to a trading fee discount, are 0.15%. This fee is quite in line with the industry average. Makers pay a slightly lower fee, 0.10% (this promotes liquidity).

To summarize, the trading fees are roughly in line with industry average. Trading fee discount table as follows (in Turkish):

Thodex’s withdrawal fee is also quite low, sitting at 0.0007 BTC when withdrawing BTC. This fee is below the industry average.

Thodex offers wire transfer as a deposit method, but you can’t deposit via credit card. This of course negative news to you if you would prefer to use your credit card for any reason. But don’t despair! If you really need to deposit fiat via credit card, there is a large number of crypto exchanges offering that option. To find the right one for you, just use our Exchange Finder or the filters in our Exchange List and we’ll help you out.