Refineable Marketplace is an NFT trading platform backed by Binance and the American YouTuber Mr. Beast. Mr. Beast is also an entrepreneur and philanthropist who shot to fame for pioneering the stunt video genre on his YouTube channel.

The lord of Youtube investing in Refinable and lending his name and knowledge to the project. Then to throw a humongous cherry on it all, you have Binance, the heavyweight of the cryptoverse putting on their gloves and getting ready to duke it out in the NFT battles up ahead. It's too much to handle and the NFT players are definitely going to feel the weight of this combined force as they get ready to throw down in the near future.

Refinable is the first Polkastarter IDO to launch exclusively on Binance Smart Chain (BSC) on April 23, 2021, in a literal coup d'etat for interoperability. And unless you're an astronaut and have been adventuring on the moon the last few weeks, you know very well that NFTs are the hottest thing in the crypto world at the moment. Refinable and BSC? This is a killer combination you'll be telling your grandchildren about.

This next-generation NFT marketplace presents artists with multiple distribution options with the capability of customizing their offerings.

As the NFT platform is powered by smart contracts on the Binance Smart Chain (BSC) network, its users can also trade directly using leverage. 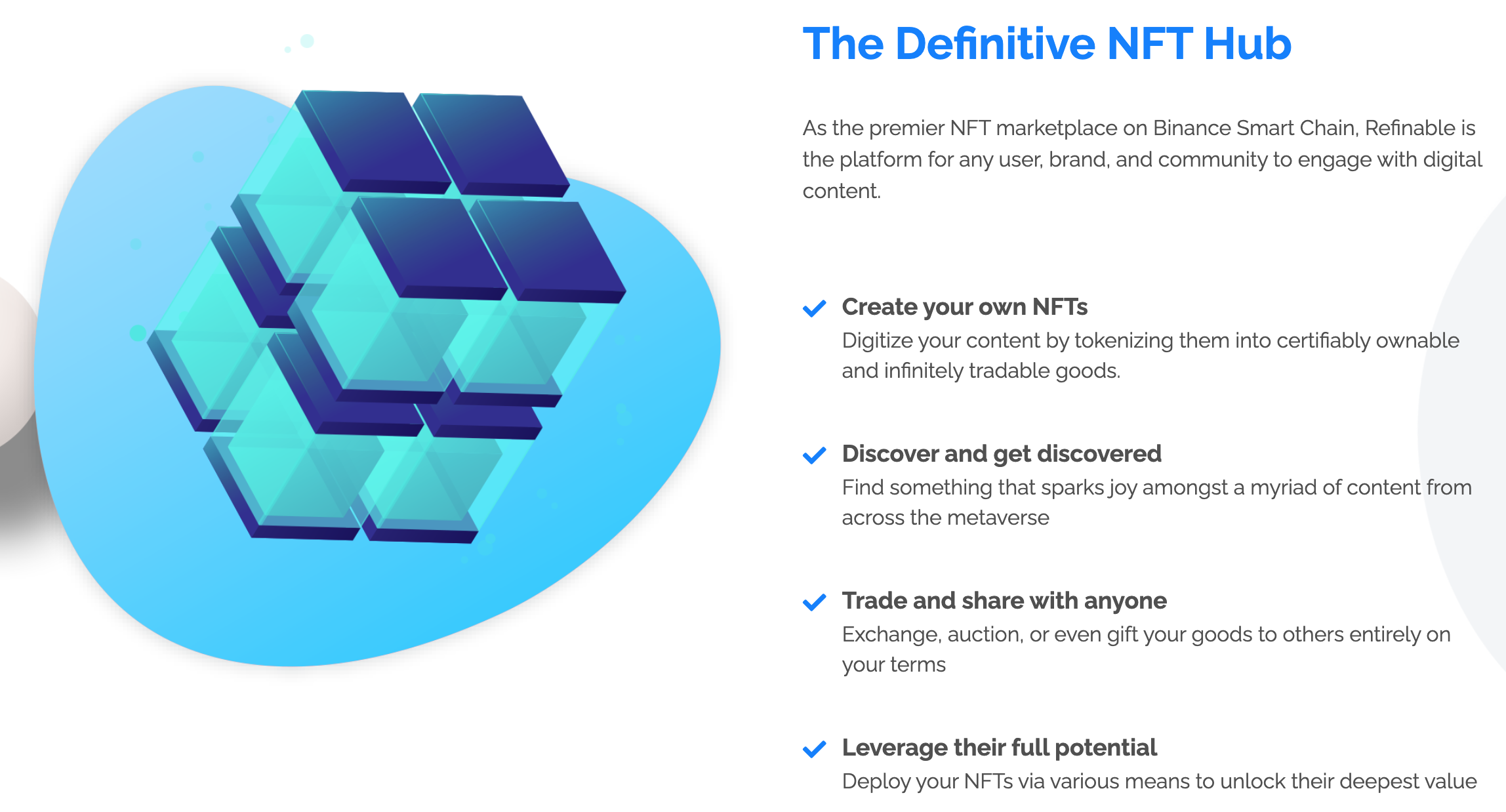 Since Beeple dropped the 69 million dollar NFT into our laps, the crypto world has been feeling the vibrations of a digital impact that will reverberate for many months, and probably years, to come. And we're loving it! Now another firestarter, Mr. Beast, of Youtube fame has decided that he's going to get into the NFT game and throw his considerable multi-million viewer channel behind Refinable and its dream to make the Binance Smart Chain the ultimate destination to discover, trade, leverage, and create NFTs. So, let's take a look at what all this is about and why Refinable is such a great addition to this already dynamic space.

Refinable marketplace is the first-ever Polkastarter IDO to be launched exclusively on BSC (launch date 23 April 2021). Binance reports that "Polkastarter is a decentralized protocol built for cross-chain token pools and auctions, enabling projects to raise capital" in their blog.

Refinable allows you to mint NFTs for a fraction of the cost you'd be paying on other platforms due to the very economical infrastructure powering it, the Binance Smart Chain (BSC). A considerable challenger to Ethereum, BSC has grown the Binance coin tremendously, skyrocketing its price to over $600 recently al because of the newfound functionality in the BSC network.

The marketplace hosts both 2D and 3D collectables.

The Refinable portal not only allows users to create NFTs but also discover and trade these NFTs using leverage. It uses $FINE tokens for governance and settling transactions on the marketplace. Community members holding these tokens can exercise their voting rights and moderate the portal.

When you make a trade at NFT Marketplaces, they may charge you a commission or a platform fee. The Refinable portal lists a service fee for buyers, primary sellers and secondary sellers. Additionally, it also claims that the BSC facilitates a secure ultra-fast paced transaction with limited fee exposure to its end-users.

On tracking the marketplace to find out whether the exact details of the fees/charges involved with using the platform, we saw that the fees were classified into two categories — Standard Users and Verified Token Holders. Verified Token holders are charged a lower service fee compared to standard users. Here's the fees table for Refinable.

The platform launched on 23 April 2021. We are excited to see a new NFT marketplace coming up. We will definitely update the review with more on the marketplace layout. Until then, here's a sneak peek. 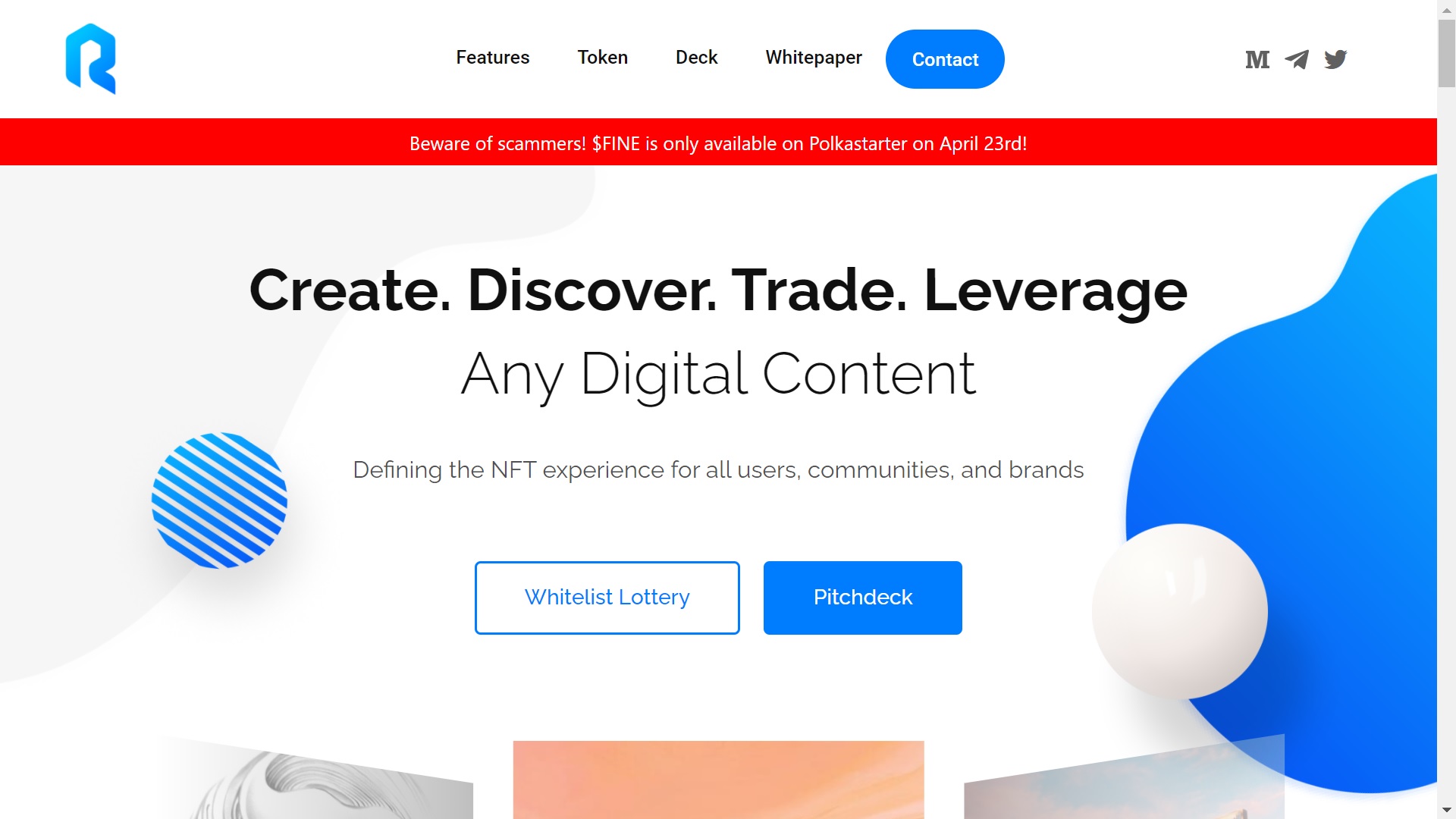 A few of the NFT Marketplaces out there accept deposits and payments via credit or debit card, and some even accept PayPal deposits. We have not been able to conclusively determine whether Refinable Marketplace will allow any of these deposit methods.

While you eagerly wait for the Refinable public beta launch, do check out some other NFT Marketplaces on our list.

There is no doubt that we are early in the NFT game. And like all new things you'll have the original warriors who started it all, shout out to our man Beeple and others like him, then you'll have all the copycats who just want to cash in on the trend and make few dollars while taking advantage of other people's hard work. But after the dust settles, what you'll eventually see is that the best of the best will rise to the top, while the chaff of the corn will fall to the bottom.

It's like this with all new things, and NFTs are no different. It's not unlikely that, when the chaff falls, when the bells toll, when saber rattles free from its sheath... Refinable and quality projects like it will be the last ones standing to raise the bar even higher for NFTs specifically, and the crypto space as a whole.