What is Satang Pro?

Satang Pro was allegedly developed to meet the “trading needs of a growing professional and retail market”. The Satang Pro Team declares themselves as committed to bringing security, speed and transparency to the market (specifically the Thai market where they seem to think such security, speed and transparency have been absent). The CEO of this exchange is also very experienced, having created ZCoin (XZC), Vertcoin (VTC) and Satan (one of the more popular Bitcoin Social Wallets in Thailand).

Satang Pro does not explicitly state that US-investors are prohibited from trading. Accordingly, we do believe that US-investors can trade here. Any US-investors interested in trading here should in any event form their own opinion on any issues arising from their citizenship or residency.

The liquidity levels on Satang Pro are unfortunately very low. On the date of last updating this review (2 December 2021), the 24-hour trading volume was USD 3.3 million, according to Coinmarketcap. So the order book can be quite thin here, which any prospective user should be aware of before creating an account.

Different exchanges have different trading views. And there is no “this overview is the best”-view. You should yourself determine which trading view that suits you the best. What the views normally have in common is that they all show the order book or at least part of the order book, a price chart of the chosen cryptocurrency and order history. They normally also have buy and sell-boxes. Before you choose an exchange, try to have a look at the trading view so that you can ascertain that it feels right to you. The below is a picture of the trading view at Satang Pro:

Every trade occurs between two parties: the maker, whose order exists on the order book prior to the trade, and the taker, who places the order that matches (or “takes”) the maker’s order. We call makers “makers” because their orders make the liquidity in a market. Takers are the ones who remove this liquidity by matching makers’ orders with their own.

Satang Pro doesn’t charge different fees between takers and makers. Their fee model is instead something we call a “flat fee model”. Satang Pro’s flat fee is 0.20%. This is perfectly in line with industry average.

Satang Pro also offers trading fee discounts when you have a large trading volume during the preceding 30 days. Trading fees can become as low as 0.12% for both takers and makers if they have a large trading volume (over THB 320 million, which on this day corresponds to roughly USD 9.8 million). The exact trading fee discounts are set out in the below table (obtained before the lowering from 0.25% to 0.20%): 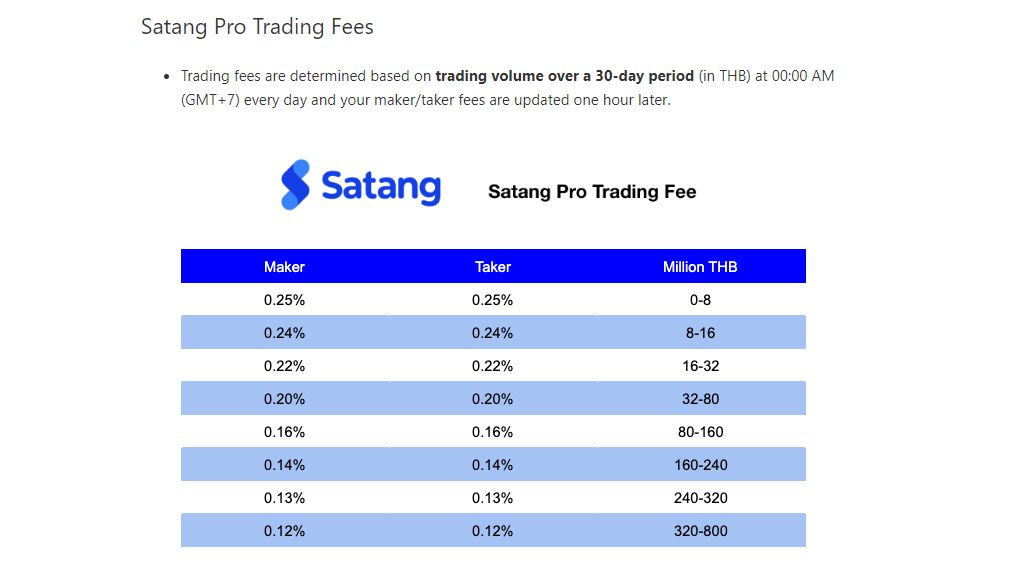 Satang Pro offers wire transfer as a deposit method, but you can’t deposit via credit card. This of course negative news to you if you would prefer to use your credit card for any reason.

However, as Satang Pro accepts deposit of fiat currencies at all, it distinguishes itself from many exchanges that only allows deposits in cryptocurrencies.

With respect to deposit processing time, deposits from Thai bank accounts usually take up to 24 hours. This is a quick process. If you hold your bank account with a non-Thai bank, it can take up to 7 days, but could also be a lot quicker. Cryptocurrency deposits are more swift (as always). Usually just 1-2 hours, but depending upon the blockchain network used.