The price of Ethereum has experienced considerable fluctuations in the lead-up to The Merge. With the second largest blockchain network in the world transitioning from Proof-of-Work (PoW) to Proof-of-Stake (PoS), cryptocurrency analysts hold vastly different opinions about the future price trajectory of the network’s native token ETH.

In this article, we will be taking a look at different potential scenarios for the price of ETH after the network’s most significant upgrade ever. But first, let's briefly explain what is the Ethereum Merge.

What is The Merge?

The Merge is an Ethereum protocol upgrade that will see the Ethereum mainchain merge with the PoS-powered Beacon Chain that launched in late 2020. The transition to PoS is expected to reduce the network’s energy consumption by more than 99% and lay the groundwork for future sharding upgrades that will significantly improve the network’s throughput and scalability.

Once the rollout of the new upgrade is completed, Ethereum miners will no longer be responsible for securing the network, verifying transactions, and creating new blockchain blocks for the first time since the platform launched in 2015. Instead, these responsibilities will fall on Ethereum’s Proof-of-Stake validators, who will earn a share of ETH staking rewards for their contribution.

After months of delays and postponements, Ethereum developer Tim Beiko revealed in late August that The Merge is expected to take place on September 15.

What will happen to the price of Ethereum?

In the past three months, ETH experienced considerable swings – the world’s second-largest crypto dropped from $1,900 in early June to beneath $900 just two weeks later. ETH rebounded from its yearly low by surging beyond $2,000 in mid-August. In the second half of the month, ETH started trending downwards and hit $1,618 at the time of writing. The hefty price fluctuations can largely be attributed to investors being uncertain about the post-Merge future. 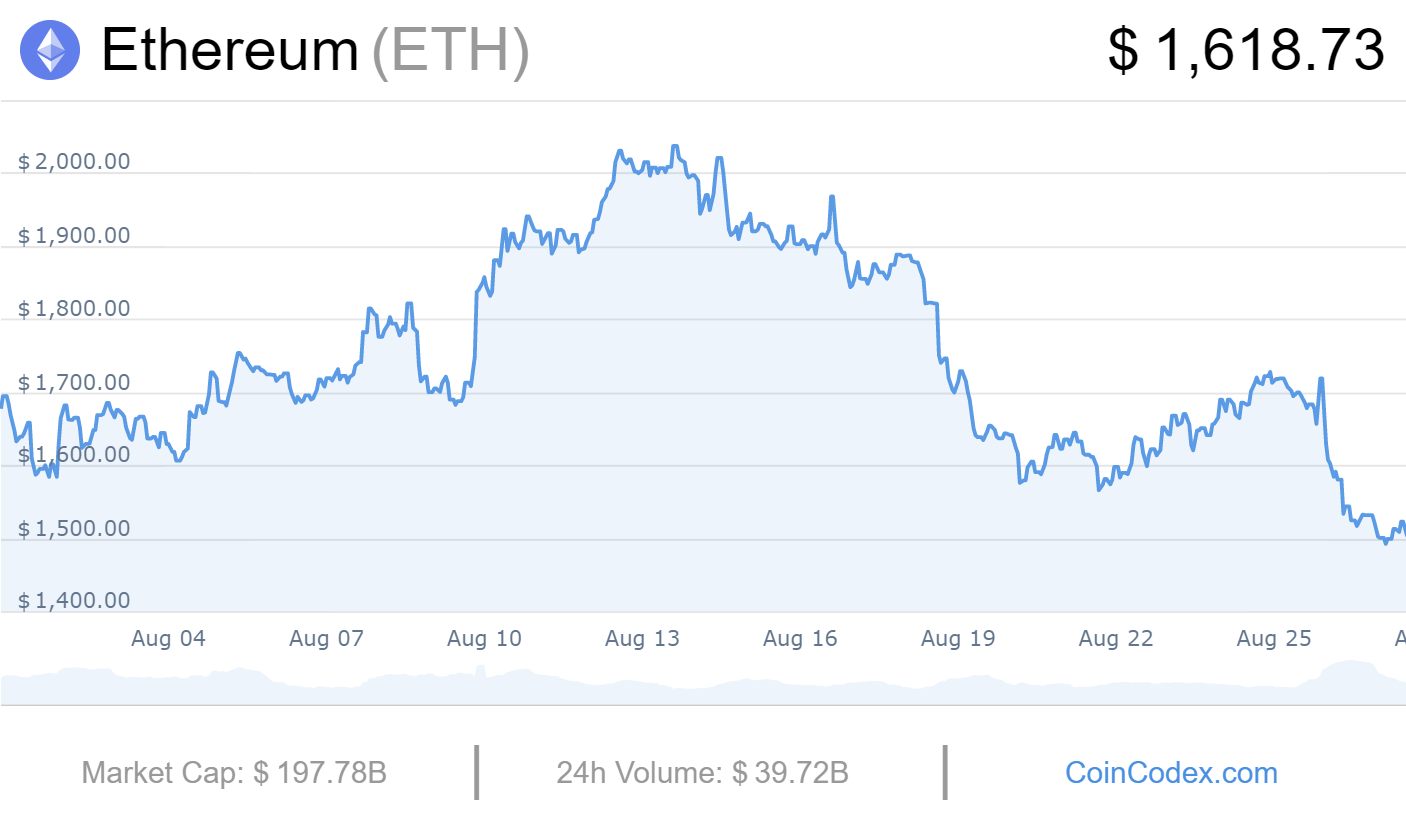 As mentioned in the introduction, the cryptocurrency community is split when it comes to forecasting ETH’s price movements following The Merge.

For instance, a prominent crypto analyst and former CEO of BitMEX, Arthur Hayes, believes that a successful Merge could lead to Ethereum ending the year on an upswing.

Hayes highlights the fact that The Merge going smoothly could introduce “the pressure on the buy side,” creating “a positive feedback loop that leads to higher spot prices.” Hayes summarized his thoughts in a Twitter post, saying:

“If you believe the Merge is going to succeed, then this is yet another positive structural reason why $ETH could gap higher into the end of the year.”

In a blog post published in early August, Hayes wrote that ETH could reach $3,500 if The Merge goes as expected. He added that Ethereum could reach a new ATH of $5,000 in the best-case scenario, which would see the successful Merge be accompanied by the Fed’s pivot toward a less restrictive monetary policy.

While certainly bold, Hayes’ price predictions seem to be grounded in reality. According to CoinCodex estimates, which take into account a number of market indicators, market sentiment, and the degree of volatility, the price of Ethereum could see a substantial increase in the medium term, surpassing the $3,000 mark in the fourth quarter of this year and reaching $5,000 in early 2023.

On the other end of the “What will happen with ETH post-Merge” debate is a crypto trader and full-time investor Jason Pizzino. Pizzino thinks Ethereum’s surge in August was mainly a product of the “Buy the hype, sell the event” type of investing, and not driven by fundamentals.

One important metric that usually reflects broader investor sentiment is the amount of ETH that is deposited on exchanges. According to blockchain analytics firm CryptoQuant, ETH exchange inflows started to surpass inflows in late August, which suggests that ETH holders could be prepping their holdings for selling. However, the discrepancy between inflows and outflows is currently on the low side, which means that it shouldn’t have much of an impact on ETH price, at least in the short term.

Ethereum’s future price movement primarily hinges upon the smooth rollout of The Merge upgrade. However, it is worth noting that ETH doesn't exist in a vacuum – its market performance is heavily correlated with broader macroeconomic trends, such as inflation and interest rate hikes, that have a substantial impact on the value of ETH, other digital currencies, and expansionary assets in general.

Frequently asked questions about The Merge

What does the Ethereum Merge mean?

The Merge refers to a protocol upgrade that will see the current Ethereum mainnet merge with the Proof-of-Stake Beacon Chain. This will mark the end of Proof-of-Work on Ethereum, meaning that the Beacon Chain will assume the role of creating new blocs.

When is the Ethereum Merge taking place?

The Merge is taking place in mid-September. The exact Ethereum Merge date is hard to predict due to the varying difficulty of mining new blocks. The Ethereum foundation posted the terminal total difficulty that will trigger The merge, which is expected to occur between Sept 10-20, 2022. It is worth noting that prominent Ethereum developer Time Beiko pointed out September 15 as the most likely Merge date.

What is the price prediction for Ethereum after The Merge?

Ethereum price predictions following The Merge differ greatly. Some analysts believe that ETH will surpass its previous ATH of roughly $4,800 after the transition to PoS, while others believe The Merge won’t have much of an impact on ETH price.

What happens to my Ethereum after the Merge?

From the standpoint of a regular ETH user, virtually nothing will change after The Merge. However, background processes introduced with The Merge will help make the network up to 99.95% more efficient and not reliant on expensive and resource-intensive PoW mining equipment.

DISCLAIMER
The views, opinions and positions expressed in this article are those of the author alone and do not necessarily represent those of https://www.cryptowisser.com/ or any company or individual affiliated with https://www.cryptowisser.com/. We do not guarantee the accuracy, completeness or validity of any statements made within this article. We accept no liability for any errors, omissions or representations. The copyright of this content belongs to the author. Any liability with regards to infringement of intellectual property rights also remains with them.