Nominex is a cryptocurrency exchange registered in Estonia. It launched in August 2019.

In addition to the above advantages, Nominex has also told us here at cryptowisser.com that they will soon launch staking, leverage and copy trading in the nearest future. We'll have to wait and see when it happens, and when it does happen, we will write about it in this review.

On 7 April 2021, Nominex also announced that they would join the Binance broker program, meaning that you can use "all of Binance's tools" when navigating and using the Nominex platform.

Most crypto traders feel that desktop give the best conditions for their trading. The computer has a bigger screen, and on bigger screens, more of the crucial information that most traders base their trading decisions on can be viewed at the same time. The trading chart will also be easier to display. However, not all crypto investors require desktops for their trading. Some prefer to do their crypto trading via their mobile phone. If you are one of those traders, you’ll be happy to learn that Nominex’s trading platform is also mobile compatible.

As many other exchanges, Nominex has its own referral program where you can invite new members and earn real money for that. However, unlike any other crypto exchange this one doesn’t have any restriction on how many referral levels you get profit from. This simply means that you can possibly have a million (or more) levels in your referral tree and gain 8 different types of bonuses from them, such as your direct reward (for inviting new people by yourself), team bonus of 5-10% of your whole team’s efforts, bonus for a quick start, for your team support and so on.

On 24 March 2021, the exchange announced that the maximum referral bonuses for direct referrals was now increased to 40%. But not only that, staking bonuses as high as 900% are also offered by the platform.

Every trading platform has a trading view. The trading view is the part of the exchange’s website where you can see the price chart of a certain cryptocurrency and what its current price is. There are normally also buy and sell boxes, where you can place orders with respect to the relevant crypto, and, at most platforms, you will also be able to see the order history (i.e., previous transactions involving the relevant crypto). Everything in the same view on your desktop. There are of course also variations to what we have now described. This is the trading view at Nominex:

It is up to you – and only you – to decide if the above trading view is suitable to you. Finally, there are usually many different ways in which you can change the settings to tailor the trading view after your very own preferences.

Why do so many exchanges not allow US citizens to open accounts with them? The answer has only three letters. S, E and C (the Securities Exchange Commission). The reason the SEC is so scary is because the US does not allow foreign companies to solicit US investors, unless those foreign companies are also registered in the US (with the SEC). If foreign companies solicit US investors anyway, the SEC can sue them. There are many examples of when the SEC has sued crypto exchanges, one of which being when they sued EtherDelta for operating an unregistered exchange. Another example was when they sued Bitfinex and claimed that the stablecoin Tether (USDT) was misleading investors. It is very likely that more cases will follow.

It is unclear whether Nominex permits US investors or not. We have read their Terms and Conditions and have not found any explicit prohibition of US investors. We urge any US investors to form their own opinion on the permissibility of their trading at Nominex though.

Nominex has its own utility NMX tokens. As mentioned below under Nominex Trading Fees, they allow its users to cut the fee by a half by paying with them. The unique feature about NMX tokens is that they are not distributed as a regular IEO. Nominex uses a new hybrid way they call DCO (Demanded Coin Offering) that means investors can either buy as many NMX as they like or they can earn them as a reward through affiliate program and trading.

There is a special daily pool of 65 252 NMX tokens that is spread among all active traders proportionally to their trading volume during the last 24h.

Then you can use these tokens to pay the trading fees. In fact you can trade with ZERO fees because you did not buy these NMX. The price for NMX now is 1 USDT.

What is the most important, every day more and more new traders go to Nominex and trade there. So the sooner you start to trade on Nominex the more NMX tokens you will earn because of less other traders who pretend for 65 252 NMX tokens distribution too.

The number of token holders had as of - 24 March 2021 - just exceeded 5,000, according to information in an email from Nominex to its users.

Every time you place an order, the exchange charges you a trading fee. The trading fee is normally a percentage of the value of the trade order. Many exchanges divide between takers and makers. Takers are the one who “take” an existing order from the order book. Makers are the ones who add orders to the order book, thereby making liquidity at the platform.

Nominex charges what we call flat fees, meaning that both the takers and the makers pay the same fee: 0.10%. These taker fees are in line with, or even slightly below, the global industry averages for centralized exchanges. Industry averages have historically been around 0.20-0.25% but we now see new industry averages emerging around 0.10%-0.15%.

It can also be noted here that if you have a 30 day trading volume that exceeds certain levels, you are rewarded with lower trading fees. The below table illustrates the thresholds you need to exceed in order to receive the more attractive trading fees. Holding the exchange's native token, the NMX Token, will also grant the relevant user a trading fee discount as further detailed in the below table: 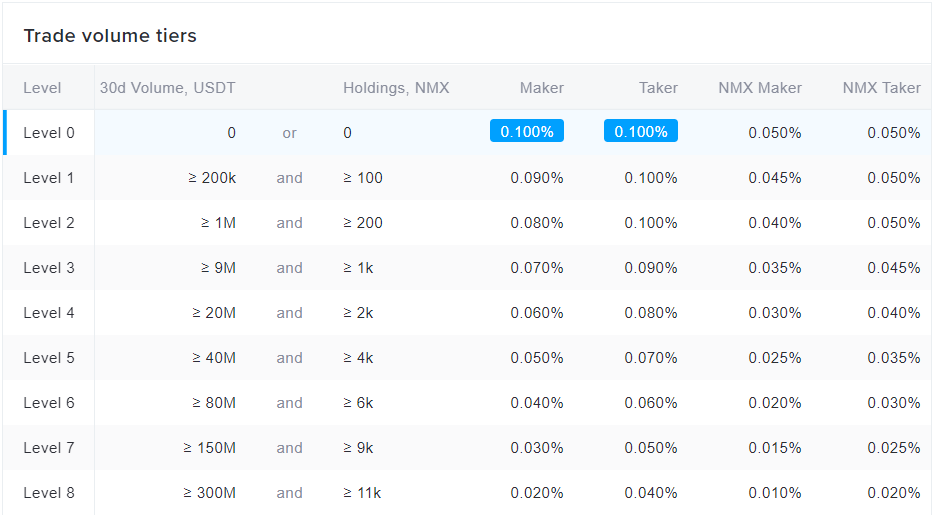 Nominex lets you deposit cryptocurrency assets to the exchange, which is quite standard. However, they also let you purchase and sell crypto via debit and credit cards. To be more specific, they cooperate with two payment service providers called Koinal and Mercuryo. Through these providers, users can use their VISA or MasterCard to purchase or sell cryptocurrency. If you use Koinal, you don't have to complete a KYC-process. If you use Mercuryo, you do have to complete a KYC-process.

Wire transfer, on the other hand, are not an accepted deposit method at this platform.

Seeing as fiat currency deposits are at all possible at this trading platform, Nominex qualifies as an “entry-level exchange”, meaning an exchange where new crypto investors can start their journey into the exciting crypto world.

This claims to have Military Grade Security. As examples of what constitutes "military grade security", they state that they store 94% of all user assets in multi-sig cold wallets, that they work with Google servers that has a 99.99% uptime (and thus the highest reliability on the market), and that they have employed industry best practices when constructing the platform. 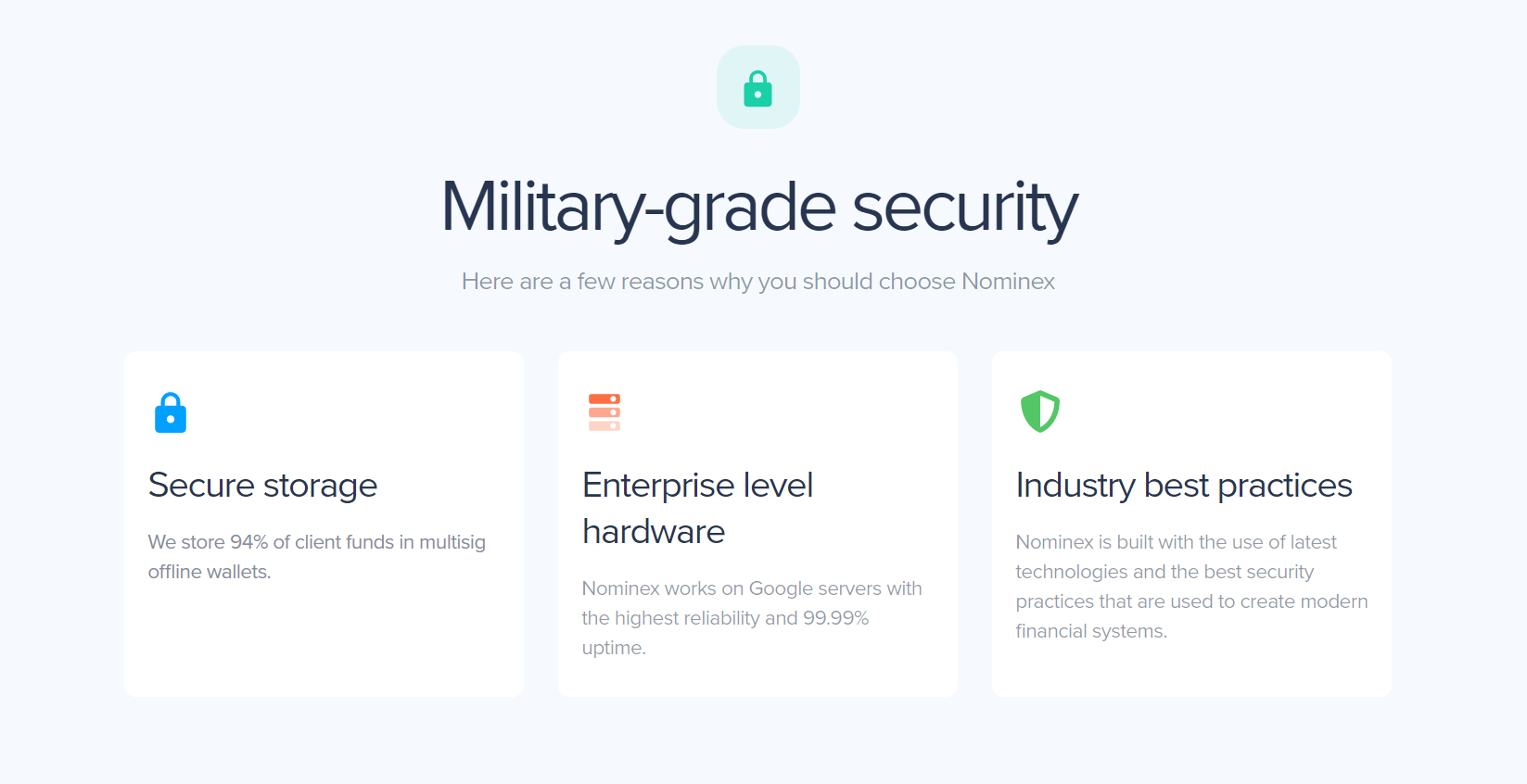