Launched in January 2021, MDEX Exchange is an automated market maker operating on a decentralized trading protocol. Six months since its launch, MDEX is witnessing tremendous growth in popularity. Originally launched on the HECO chain, MDEX has evolved into a multi-chain protocol after its integration with the Binance Smart Chain.

At the time of first writing the review (17 June 2021), the exchange reported a total value locked close to USDT 3.4 billion.

The exchange supports a number of different cryptocurrencies, including Bitcoin, Ethereum, DASH, and Bitcoin Cash.

MDEX users can choose to swap cryptocurrencies, pool digital assets for rewards, and trade on the exchange. With its innovative dualized mining, users can enter into secured transactions and benefit from the guaranteed liquidity process.

The Binance Smart Chain integration and the platform upgrade in mid-March have made the MDEX exchange faster and cheaper than Ethereum. The exchange also acts like an Automated Market Maker that matches off your trades automatically as well as an aide to other businesses for launching applications.

MDEX has not listed any specific wallet as a recommended one. However, its FAQ section tackles certain issues a user might face with Huobi Wallet, MetaMask, and TokenPocket Wallet. Some other supported wallets include Math, ONTO, and Bitkeep.

MDEX addresses the liquidity concern efficiently with its double mining solution. According to a news release published in the first week of June, MDEX topped the leader board as the BTC/DEX trading platform offering the highest level of liquidity. The exchange deploys a Repurchase and Burn mechanism that burns MDX tokens if the actual price of the token falls below or is equal to its average transaction price. This mechanism ensures that users have access to sustained liquidity.

Why do so many exchanges not allow US citizens to open accounts with them? The answer has only three letters. S, E and C (the Securities Exchange Commission). The reason the SEC is so scary is because the US does not allow foreign companies to solicit US investors unless those foreign companies are also registered in the US (with the SEC). If foreign companies solicit US investors anyway, the SEC can sue them. There are many examples of when the SEC has sued crypto exchanges, one of which being when they sued EtherDelta for operating an unregistered exchange. Another example was when they sued Bitfinex and claimed that the stablecoin Tether (USDT) was misleading investors. It is very likely that more cases will follow.

Decentralized exchanges are different beings than the abovementioned examples. They never have custody of any user assets. They normally don't accept any fiat currency. As such, they are less scary for regulating authorities and the same reasons to prohibit citizens from certain countries to use them can't be applied. Accordingly, we have marked MDEX as "allowing US-investors" in our database.

Every trading platform has a trading interface. This interface is the part of the exchange’s website where you can see the price chart of a certain cryptocurrency and what is its current price. There are normally also buy and sell boxes, where you can place orders with respect to the relevant crypto, and, at most platforms, you will also be able to see the order history (i.e., previous transactions involving the relevant crypto). Everything in the same view on your desktop. There are of course also variations to what we have now described. This is the swap interface at MDEX (without connecting to a wallet): 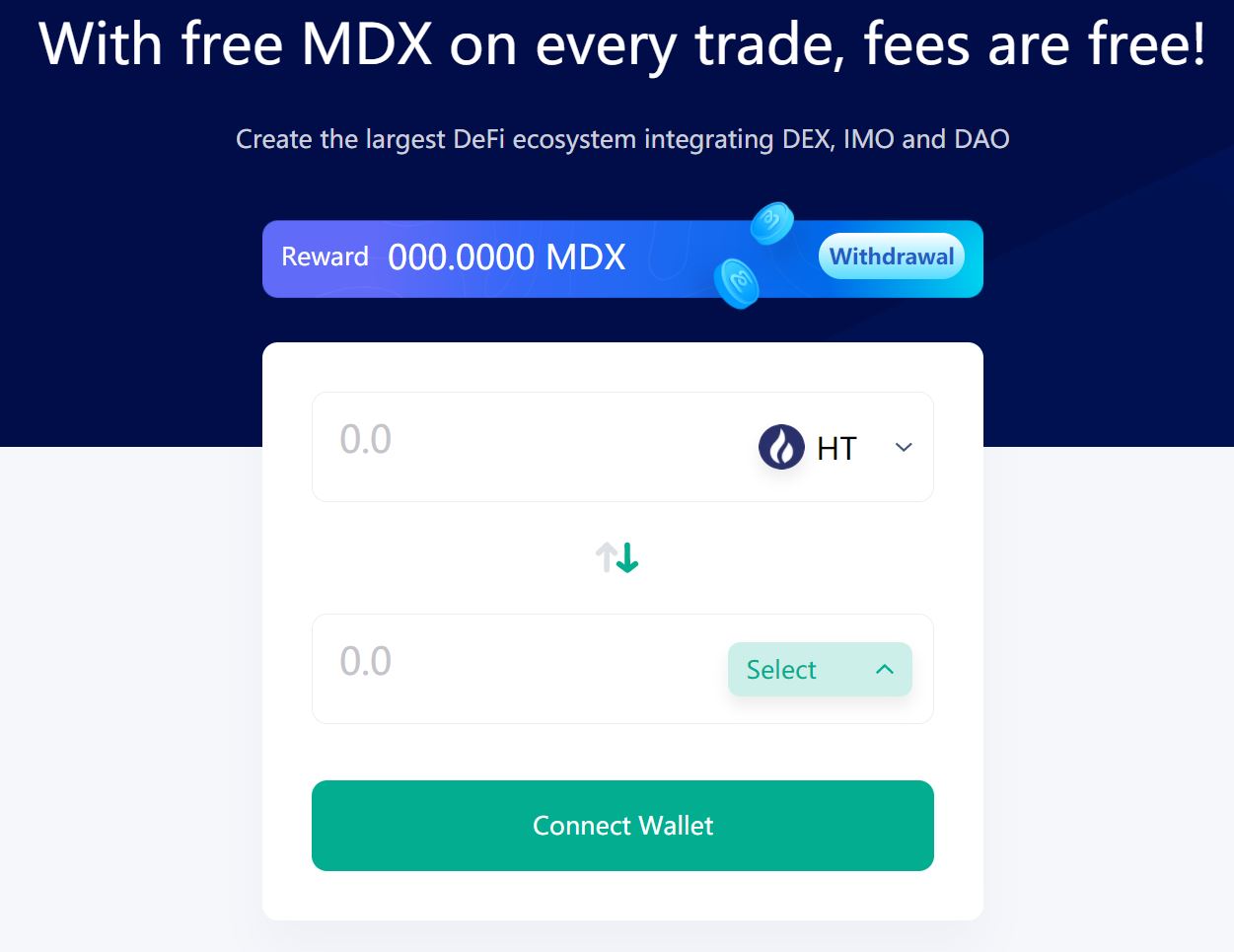 It is up to you – and only you – to decide if the above swap interface is suitable for you. Finally, there are usually many different ways in which you can change the settings to tailor the trading interface after your very own preferences.

When it comes to centralized exchanges, many of them charge what we call taker fees, from the takers, and what we call maker fees, from the makers. Takers are the people removing liquidity from the order book by accepting already placed orders, and makers are the ones placing those orders. The main alternative to this is to simply charge “flat” fees. Flat fees mean that the exchange charges the taker and the maker the same fee.

MDEX is not one of the "no fee" exchanges. It charges 0.30% per transaction regardless of whether you are a maker or a taker. Out of the transaction fee collected for each trade, 0.10% is diverted to enhance the project ecosystem, miners get 0.14% as rewards, and 0.06% is earmarked for the Repurchase and Burn mechanism.

Regardless of whether you compare to DEXs or centralized exchanges, these fees are on par with (or slightly above) the industry average.

Generally speaking, to only have to pay the network fees should be considered as below the global industry average when it comes to fee levels for crypto withdrawals (if you include all exchanges, both DEXs and CEXs in the data set).

MDEX does not – like all (or at least close to all) other DEXs – accept any deposits of fiat currency. This means that crypto investors without any previous crypto holdings can’t trade at this trading platform. In order to purchase your first cryptos, you need a so-called entry-level exchange, which is an exchange accepting deposits of fiat currency. Find one by using our Exchange Filters!

The servers of DEXs normally spread out across the globe. This is different from centralized exchanges that normally have their servers more concentrated. This spread-out of servers leads to a lower risk of server downtime and also means that DEXs are virtually immune to attacks. This is because if you take out one of the servers, it has little to no impact on the full network. However, if you manage to get into a server at a centralized exchange, you can do a lot more harm.