As expected, the Bitcoin halving event helped the price to move higher. The data from the world’s biggest exchanges and institutional traders show a surge in interest to trade Bitcoin around the time the halving event took place.

On the day of the event, Bitcoin options trading volume on the CME jumped to $17 million, much higher compared to $9.9 million set on May 6. The surge in interest likely reflects the increase in the involvement of institutional players that may stay in the game even after the halving event.

Events - like the Bitcoin halving - also have the ability to attract the attention of traders and institutions whose focus may not be on crypto markets in particular. While they’re still “in”, they may want to pay attention to a different facilitator that can propel Bitcoin price higher.

This widely-tracked technical indicator - “golden crossover” - has just taken place and may help the recently-started uptrend to extend higher.

What is a golden crossover

This simple technical indicator shows that the average of more recent closing prices is signalling a move higher. As we know, the moving average is calculated by summing recent prices and then dividing that by the number of the selected time periods. Hence, the 50-DMA looks at the 50 most recent closing prices of Bitcoin on a daily basis and then divides that number by 50.

As such, it is a “faster” moving average than the 200-DMA. It is based on the lower number of days and therefore, it can perform turns in a faster manner than a much slower 200-DMA.

How to trade the golden crossover

Still, the golden crossover is a quite reliable indicator. When you combine the fact that it doesn’t take place so frequently and its reliability and effectiveness, you understand its appeal better.

Looking at Bitcoin in particular, the golden crossover occurred only a handful of times. Most recently, it took place in February, just before the COVID-19 outbreak hit the crypto markets. On the same day, the Bitcoin price gained 5% before moving lower in the coming weeks.

Prior to February this year, the golden crossover was last spotted in April. On the day it occurred, the Bitcoin price closed 2.85% higher. A month later, the price of the world’s largest digital coin traded at the levels that are 40% higher.

In order to find a third such occasion, you would need to go back to the late 2015. At this time, the golden crossover helped Bitcoin and the entire crypto market to double its value in a month’s time. All in all, there is historical evidence that Bitcoin tends to move higher around the time the golden crossover occurs. 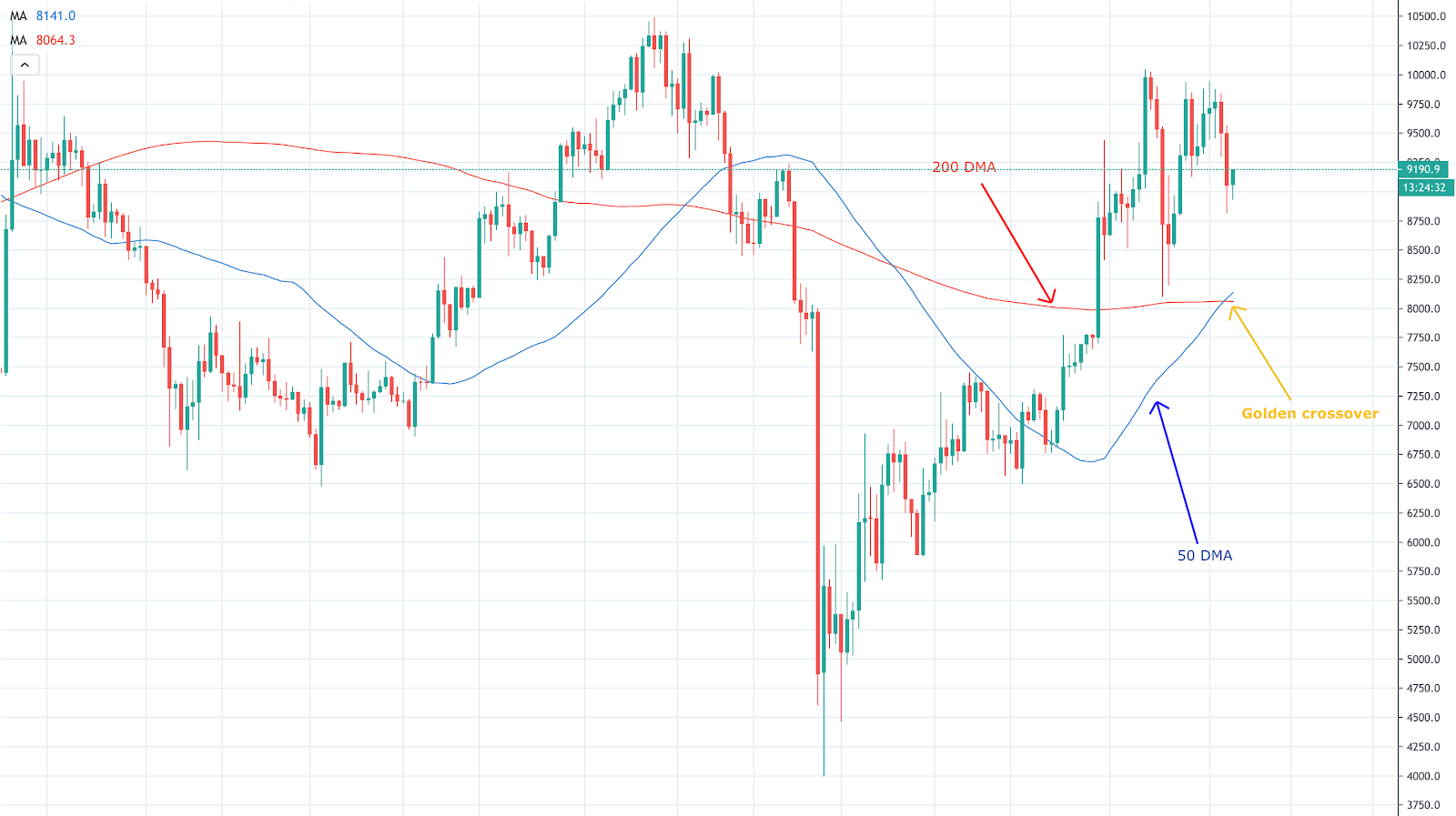 Looking at the “live” daily chart on Bitcoin, we see that the price closed nearly 5% lower yesterday, when the golden crossover took place. However, the historical evidence shows that the price action tends to move higher after the golden crossover takes place. This case is further supported by the fact that the crypto market looks bullish from a general technical perspective.

Therefore, the golden crossover may provide just the nudge that is needed for Bitcoin and cryptocurrency market in general, to finally see the price action trading above $10,000 on a regular basis.

Following the halving event that helped the Bitcoin price to extend higher, traders have turned their attention towards the golden crossover technical indicator. This scarce but effective indicator takes place when the 50-DMA moves above the 200-DMA, an event which occurred yesterday.

In most cases, Bitcoin price was boosted by the occurrence of the golden crossover. Although the world’s largest digital coin moved lower yesterday, the historical performance of Bitcoin in the weeks that follow the golden crossover gives us reasons to be positive and optimistic.