Since the first appearance of cryptourrency in 2009, there are still no global laws that regulate them although they allow cheaper, faster, and more anonymous transactions. More than 60 countries are exploring to roll out their own cryptocurrencies and one of them is the UK. This country is, actually, planning to create its own virtual currency under the name of Britcoin to help people make quick transactions without serving their bank accounts.

This central bank-backed digital currency will be overseen by the Bank of England. Taking the same form as the banknote but in digital form, the £10 of Britcoin will always hold the same value as the £10 note. China is the first country to release a digital yuan and hopes to use this central bank digital currency (CBDC) in the 2022 Olympics. As the Bank of England (BoE) is currently consulting on whether to introduce Britcoin in the UK, here are the cons and pros of launching digital fiat currency there. 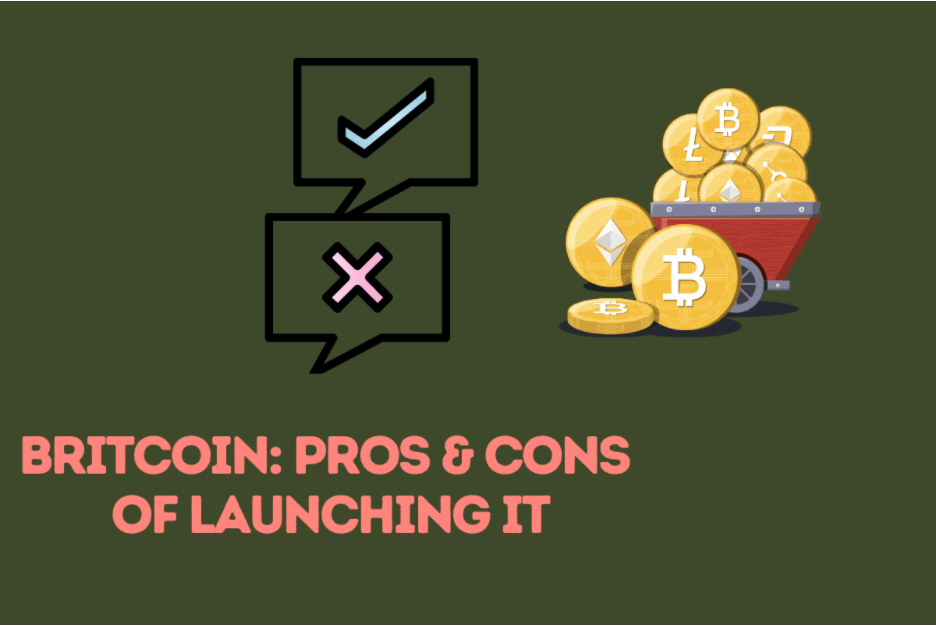 A factor for the pound development

According to Rishi Sunak, the British Chancellor of the Exchequer in a financial industry conference, a new task force between the Treasury and the Bank of England was being released with the goal to coordinate exploratory work on a potential central bank digital currency. This CBDC will drive significant innovation and efficiency not only in the whole financial sector but also in the country’s economy.

Aman Cheema, the senior vice president of FIS (Florida Based Fintech Companies) affirmed that central bank-issued digital currencies had the potential to drive significant innovation and efficiency across the entire financial sector and the wider economy. In addition, it would also drive a generational shift both in how people think about and use money.

Businesses and consumers can hold accounts directly with the bank

The introduction of a CBDC is also an opportunity for both businesses and consumers to hold accounts directly with the bank. Cheema reported that the pandemic has accelerated the shift to e-commerce and the use of digital payments, the central bank digital currencies with nations around the world have become interested in these innovations.

Therefore, a digital version of the pound sterling, backed by the Bank of England allows the businesses and consumers to hold accounts directly with the bank. According to the BoE, "The Government and the Bank of England have not yet decided on whether to introduce a CBDC in the UK and will engage widely with stakeholders on the benefits, risks, and practicalities of doing so"

The Bank of England’s money could be used

By launching Britcoin, all are able to use the Bank of England’s money by removing the middleman altogether. Apart from that, commercial banks can also potentially reduce some fees and profits. Thus, the risk of their money being held by a bankrupt commercial bank will also be removed. As the Bank’s money is only spent when using banknotes, this relationship between the Bank of England and the ordinary savers and spenders can also change.

We live in the digital age when the majority of the transactions are electronic and many British customers use them in high-risk businesses including UK casinos not on GamStop block, crypto platforms, forex exchanges. Nonetheless, the protection of consumers, businesses, and wider society must be established because of the payment technology progression and the release of different payment options.

The technology might fail or be attacked by hackers

One of the remarkable disadvantages of launching CBDC is the possibility of the technology failing. The hackers can also attack it leading to its failure among the users. The cryptocurrencies are hackable including Britcoin.

As crypto provides a high degree of anonymity, it can also be used to mask the user's identity and do not want to share their personal information. In fact, all the data related to spending can lead to a 'Big Brother' society.

A risky bet for investors

As said by Andrew Bailey, the Governor of the Bank of England, even the most popular cryptocurrency bitcoin failed to act as an efficient way to make transactions and a stable store of value. In other words, this digital base money cannot be used as a currency, meaning a risky bet for investors.

Moreover, the digital version of sterling will never replace the physical cash or existing bank accounts. Since BoE had not yet made a decision on the introduction of this virtual currency, its release must follow strict regulations.